Scraped up my courage and went to walk at the gym on Fort Meade where I work. Oh, but I was nervous – how’d I look in the midst of a bunch of fit military men? What would they think? Would they laugh? Would I be surrounded by buff naked guys? Would I not be?

It wasn’t as bad as I expected at all. Even after I set the treadmill far too fast for me, and couldn’t, panicking, figure out how to get it to stop or slow down, and wound up flying off the back end onto my back end. One jogger two ‘mills down did stop and ask me if I were okay but it was just my dignity that was wounded.

Walking on a treadmill is very different from ambling around the neighbourhood; you just keep going, with no stopping to cross roads or change the music on your iPod or anything, without actually pausing for real. I found I tired quicker so I was content to do only 30 minutes with a few pauses. After all, I’d done nothing since Thursday of last week so anything was good. Neal will just have to put up with it. Five minutes more tomorrow afternoon is my plan.

The only thing that was a pain is that the cardio room is downstairs in the basement of the fitness center and I had to sit and catch my breath before being able to climb back up. Of course, I didn’t shower there. Actually I noticed very little eye candy, what little I did I hope I wasn’t staring at, and quite a number of ordinary people.

As I said the few people I talked to were pretty nice, but I think most weren’t there to chit chat, except in the weight room (into which I glanced lusting not after the guys but the machines).

I did make use of an internet resource, the website RealJock.com. The people there were uniformly friendly and supportive also, and everyone was right.

C was also right when he told me not to worry. What floors me is that I know as certainly as I’m sitting here that even if everyone had laughed and jeered at me, he’d still love me. To love me even if nobody else can, even if I’m discarded and degraded, because he says he sees a real, a worthwhile me that I barely know, that’s what he offers. He’s always on my side. I’m incredibly, utterly, undeservedly lucky to have him in my life. He’s so extraordinarily marvellous. I only hope I make him a tenth as happy as he makes me.

Working Out or Being Studious

Both seem to be Carlos Ponce’s skills. Here we see him surrounded by reading materials, looking very studious, and there he compares biceps and strength with Lou Ferrigno. Which do you prefer – intellectual or irrepressible Carlos? If it’s the newspapers you’re after you’re in luck – that one can be made bigger.

But he’s got to pay the bills too; here he is in a (making of?) Nokia commerical. Think about putting it on vibrate and ringing over and over again…

After Avoiding the Splinters

Apparently our mini-obsession Rafael Branciforti loves to lie about, which is belied by his fine physical shape. Here he is, a man on a mat on a Brazilian beach. Could you ask for anything more?

If you click on these pictures, he’ll get bigger and that will make him and everyone else very happy. 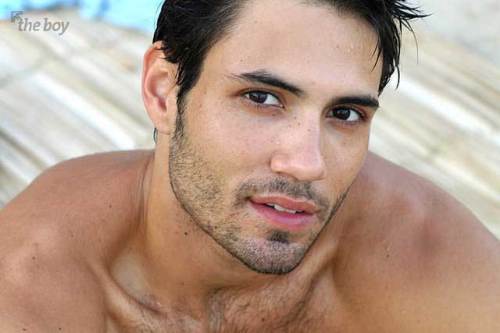 (And he does look good when you make him fuzzily, damply happy with being enlarged, doesn’t he?)