2) I sat around wasting my time talking to CH in my office instead.

3) I did not stay within my WW points.

4) I had a pizza delivered instead.

I’m not feeling too proud of myself and I think it’s with good reason. No more BS tonight, I promise.

A Movie You Should Watch 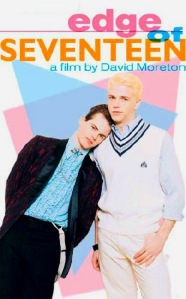 Instead of downloading the pics I took of CH yesterday, and posting them and the ones from Gettysburg on this blog, I sat around mournfully eating pizza like the greedy lazy bugger I am and watched a really good movie you should watch too. It’s called “The Edge of Seventeen” and it’s the story of a young man in high school and his experiences coming to terms both with being gay and with crushes on guys who only want him for sex, and (and this was the first time I’ve seen this in a gay-themed movie) the sadness of his (female) best friend who was in love with him who has to listen and be supportive as he tries to make it work with her, but ultimately has to tell her it never will.

The actor, Chris Stafford, who plays the lead,is very good, I thought. What makes that quite surprising is it that this was his one and only feature-length film; after making it he went to the University of Miami law school and did very well, editing the law review and going on to a career in the legal profession advocating on LGBT issues.