That just after promising to post more, I let a whole week go by without posting. Not good. First off, though, I have to say I did not gain weight last week, in fact I was down a bit. And this week I went to the gym every day but two (i.e., five days) which I’m pretty pleased about. And I did weight lifting four of those days. I even conquered my fear of using the “Freedom Trainer.” It’s an adjustable two-cable machine and when you use it you have to sort of stand away from it…nearly in the middle of the room, for all to see. But it’s really a better way to do flyes, and I want to use it this coming week for my arms work. It’s better because it wobbles a bit, forcing you to use your stabilizer muscles, and because both arms can work independently (I think) so the weaker one doesn’t come along for the ride, as it were. Here’s a video of an ingenious exercise you can do with one (the machine has a different name but it’s exactly the same set-up):

Other than that the week was pretty good. How was yours? I did think of one thing though…

This is for all the straight men who read my blog (there may be some, I guess). I want you to imagine that most people at your office and in your neighbourhood were armed militant lesbian feminists or gay men. Some of the women are hot sexy women, and sometimes they’re nice to you, but basically, if they caught you or thought you interested in them, they would either shoot you or try to injure you. Oh, and most judges are also armed militant lesbian feminists, and although recently a great deal of strides towards fairness have been made, sometimes one armed militant lesbian feminist can tell a judge that her horror at thinking you were coming on to her was the reason she killed you, and get a reduced sentence because everyone knows that that horror, of a filthy man wanting his way with a woman, is reason enough for the woman to kill him.

Most movies and television shows concern the lives and loves of armed militant lesbian feminists, or gay men, and only a few shows have the odd non-gay male characters in them, and when they do, most of the time they’re lunk-headed macho stereotypes. Although explicit love scenes of armed militant lesbian feminists or gay men are common, any depiction of a straight man and a non-lesbian woman doing more than a chaste kiss is decried as obscene or disgusting or at the most, ‘daring.’ Although again, things are getting better and lots of people enjoy their friendships with non-gays and non-lesbians. But certainly non-gay men and non-lesbian women aren’t seen by everyone as having real relationships and aren’t allowed to marry, though they can in some places have ‘civil unions.’

Some employers have ‘enlightened’ policies towards their non-gay or non-lesbian employees, but it’s still possible in some states to be fired for being heterosexual. But at your gym, where you work out, or when you are in the armed forces, you have to share a locker with armed militant lesbian feminists. You have to shower with them, and they’d better not catch you glancing at them. You see them on the basketball court and lifting weights and swimming, but you have to be careful not to admire them or look at them too long, unless you’re certain that the object of your desire is a non-lesbian. Because all your life you’ve been told that non-gay-ism or non-lesbian-ism is disgusting you have a certain shame about admitting your status, even though you’re sure there are some non-lesbians around. Imagine under those circumstances actually putting the moves on a woman you knew to be an armed militant lesbian feminists. Not too likely, is it?

So, guys, no, I’m not perving on you at the gym, though some of you are definitely perv-worthy, a gay man is very unlikely to be doing so; in fact, it’s the last place one of us would check you out. So calm the hell down about gays in the military or gays anywhere.

Oh, I think that would have been better written some time ago. Things aren’t quite as bad as that. Not for me at least. But I’m not an eighth grader in California, or a university student in Wyoming, I don’t live in Iraq or Afghanistan or Iran or the Carribean, thank God.

Or, quick, AngloAm, lighten the mood! The week was pretty uneventful although at work I had to write up my ‘accomplishments’ for my performance review. I hate doing this. I swing between thinking ‘I have none’ to ‘my stellar worth will be unrecognized.’ Close behind that second thought is the idea that if I don’t earn lots of money I won’t be doing right by my family (i.e., C) or my reputation (i.e., by my parents’ and brother’s opinions of me). 😦 It’s a lose-lose proposition.

Friday the friends and C and I went to a new pollo a la brasa place in Beltsville. It was good, C and I’d been there for lunch before. Saturday we took my new DVDs of “Little Britain” and “WKRP in Cincinatti” (the latter a birthday present) to K & D’s house and watched them after a nice meal out. It was a lovely meal.

On our way there we stopped off at a Michael’s to have a painting I bought over twenty years ago in Rothenburg-ob-der-Tauber framed. The shop was having a sixty percent off sale so we got a good price. 🙂 I can’t wait until we can pick it up. We need to get off our well padded posteriors and redecorate our living and dining rooms. That will involve removing the ugly carpeting, having somebody in to restore the underlying hardwood floors (original from 1950), getting rid of some furniture and replacing it with new, painting the baseboards and some walls, and having FIOS installed. Quite a tall order but we’ve been talking about it for a year now. We even have the flat screen TV we will need, all stored away in Bedroom 2. But we’re so lazy.

as Chris Evans here playing with something between his legs… 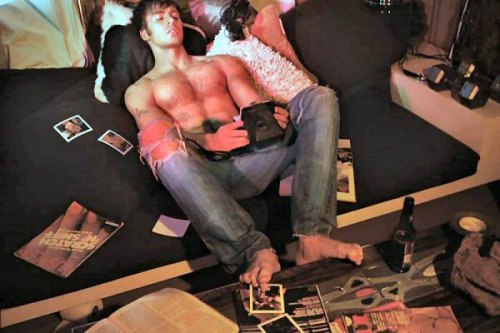 Okay, so it’s his camera. So sue me! 🙂 I wonder what will develop. I wonder if anyone under 20 knows what that means.

Out of his Undies

Now that Rafael Calomeni’s out of his undies, he and the photographer lucky enough to capture it all seem to have decided to go get wet (click on little Raffy to make him become big Raffy – see how he will smile in thanks!):