As promised, there are two new pages up there (see? see?) for various data I’d like to track on my journey to a longer life. They’ll change in format as time goes by as I’d really prefer to put them into a spreadsheet – which is really difficult in WordPress – anyone have any ideas? – or, for the exercises, upload the html generated by the software I use to track my working out.

Other than that not much since yesterday. Bob took another big load, of mulch, from Home Depot to the  house and then we went to my parents’ house to see the shots of the condo they’re buying in Venice, FL. Our plans are now to rent a place in SC or NC, perhaps off-ocean but with a pool. We like going in September as the kids are gone and the water’s still warm, but C doesn’t like swimming in the ocean and I can’t say it’s an unalloyed thrill, so if we can have ocean access we’d be theoretically okay. I don’t think we’re going to find anything at Pawleys Island where we normally go, so we’ll have to see about elsewhere.

My brother and his family were all okay and the kids were cute as usual. He showed a hilarious internet meme, “How is babby formed.” Apparently it was a real Yahoo! Answers question and a real answer and shows that there are at least two people who can’t spell and you have to wonder if they can think clearly as well:

Today C spread the mulch while I went to the gym. I moaned and groaned before but I’m really glad he pushed/encouraged me to go.

Not that I want him to learn about that! 🙂

Well, with this publicizing of my progress I hope that things will soon, like Mr. Š here, be looking up. 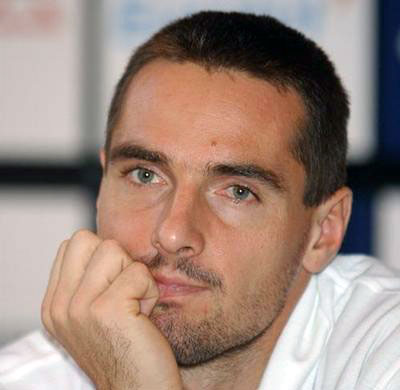 (Don’t you wonder what’s put that little smile on his chiseled features?)