Not Quite as Wobbly

It’s been a wobbly few days. I’d been feeling a but queasy for a while on Monday but by Tuesday I was fairly bad off with a stomach ‘flu. I think I’m over it now, or at least, the remedy I took has shut my system down entirely. TMI? Sorry. 🙂

Anyway, that meant that Tuesday I was unable to go work out, and then Wednesday C & I ran some errands, and had a dinner at Squisito in Edgewater. I got their chicken Parmegiana, which is enormous – three breasts of chicken over delicious gnocchi. I honestly could eat only one and took the other two home. Today because I didn’t monitor my water levels, I got a cramp at about minute 30, and stopped. It was a good decision to do so, because the cramp stayed quite some time.

At least there was some good eye candy at the gym, especially this young man who apparently went to one of the same high schools I did. (Click on any to see the full, somewhat fuzzy, view.)

So what else has AngloAm been up to? I’ve been fiddling about on Facebook quite a bit, and I found some old friends from high school in the early eighties. Perhaps more on that to come…In any event, high school was over twenty years ago. Which feels strange to say. I’m forty-three for God’s sake. That also feels really odd.

I did find on YouTube this rather cool South African advert. Do you think we could be this frank in this country?

Frankly I seriously doubt it.

To close for today (as I said, I will be posting more on my old HS friends), here is a lovely, yet ironic, shot of Roman Šebrle throwing a javelin. I say lovely for obvious reasons, but I say ironic because his career was nearly ended when he was in South Africa and a praticing South African javelin thrower accidentally threw a spear into his shoulder. (I guess it was accidental, the thrower was a female so not a competitor, but you never know – look at Zola Budd! Or better yet, look at Roman.) 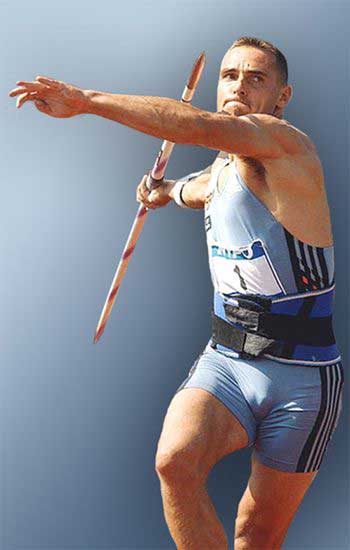 2 responses to “Not Quite as Wobbly”